Android vs. iOS: Comparison of Security in 2022 - Times News Blog
Skip to content 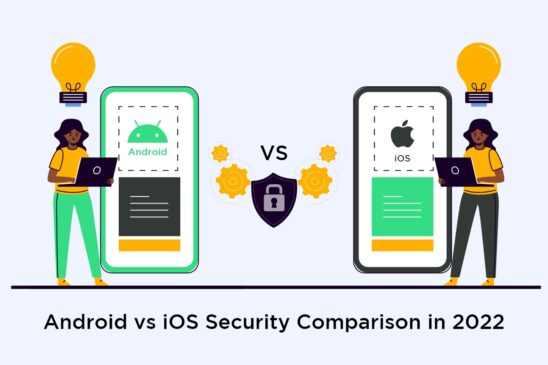 Security Features and Limitations of iOS

According to the findings, the most robust iOS upgrade is iOS 5. Throughout the upgrade’s release year, only three serious issues were detected. As a result, it’s the safest update on the list. While not all versions have been as secure as others, the following are some typical ios security benefits that you may gain if you hire dedicated mobile app developers:

Due to the proprietary nature of the software, it is harder to detect flaws.

Anyone with an Android smartphone can publish an app. However, Apple only has one app store where they can monitor the quality of the apps and reject them.

Due to iOS’s closed source code nature, it is difficult for consumers, developer/mobile app development company and a test engineer to submit feedback on found security problems.

While iOS is more secure than Android, it is still prone to security flaws such as memory corruption and execution code overflows.

Security Features and Limitations of Android

Android is the world’s most popular mobile operating system. And the most recent version of Android has received the greatest level of security. Android’s current emphasis on security is beginning to bear results.

Android has a large user base. It is used by a wide set of individuals all around the world. It detects and reports Android vulnerabilities.

Android makes use of a number of third-party security apps.

Because Android is open-source, it is frequently targeted by bad users who may easily exploit security flaws and zero-day vulnerabilities.

Most Android devices guarantee only two years of upgrades. In many circumstances, the company’s updates are released so late that the validity of devices receiving upgrades has long since expired.

Unlike iOS, Android has multiple markets available, each with its own set of program acceptance rules. This makes it simple for attackers to distribute the infected program.

While building safe solutions, fragmentation is one of Android’s most critical security challenges. It may be difficult to find anything that works across all operating system versions. Furthermore, customers may not always upgrade their mobile phones, resulting in inconsistency. As a result, many security fixes may fail to reach clients. It is worth noting, however, that the most vulnerable mobile devices are those that have not been updated.

Because Android is open-source, anyone can make harmful apps and distribute them as genuine apps. Android apps are not limited to Google Play and can be available on third-party app stores (though this is not approved). Users obtain apps from unapproved sources in order to avoid paying for them.

To know more on Android vulnerabilities, you may reach out  to a mobile app development company.

This remote access trojan jail breaks the devices, removing all built-in security features and installing malicious software, allowing the attacker to take control of the victims’ computers. There is no single antivirus solution that can provide complete protection against such threats. When the jailbreak may be easily camouflaged using mobile device management, the scenario becomes much more complicated. During the surveillance activity, a way to detect whether the device is jailbroken or not is required.

In both personal and professional lives, mobile devices have become more appealing targets for attackers. Because all communication occurs on the attacker’s network, they have the ability to listen in on or intercept your discussions. When you connect your device to an unsecured wifi network, you run the danger of becoming a victim of an attack. Unfortunately, because the mobile screen is too small to validate the URL in the browser, users can only view the notice and warning on PCs and desktops.

Because cybercriminals move swiftly, the threat landscape is the same whether you use iOS or Android. It’s natural to argue about Android vs. iOS security. On the other hand, the mounting threat cannot be avoided.

The use of social engineering in these attacks is particularly concerning. Because anyone can become a victim of a cyber-attack as a result of well-crafted phishing attempts, practising cyber hygiene and being vigilant is the best approach to maintaining security.

Once you have decided on iOS & Android, you may hire dedicated mobile app developers to help you build your mobile application.

Arjun Solanki is a Business Growth Strategist at a Leading Software Development Company USA. He has experience in developing and executing digital strategies for large global brands in a variety of business verticals. Apart from working on a long-lasting relationship with customers and boosting business revenue, he is also interested in sharing my knowledge on various technologies and its influence on businesses through effective blog posts and article writing.